Click the button below to donate to our Syria in Crisis Appeal now. 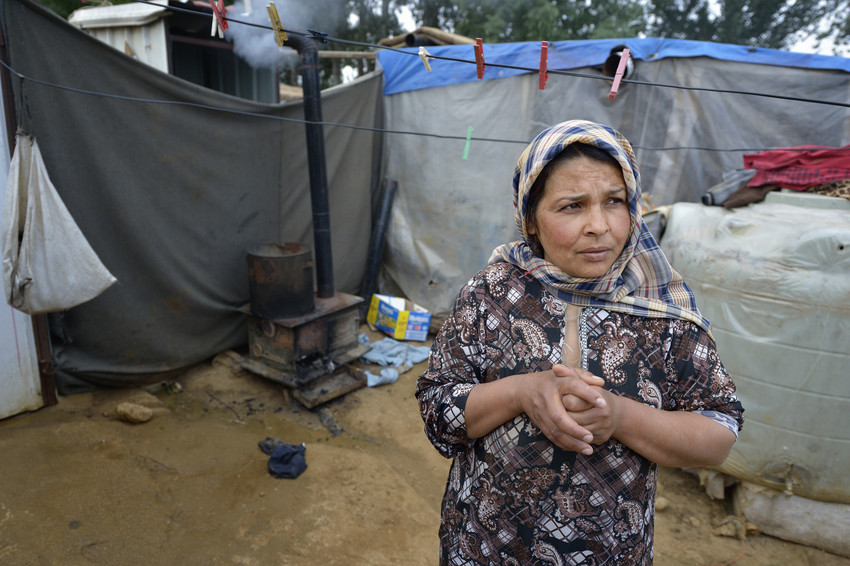 Fadia, who escaped fighting in Aleppo, Syria, stands in front of her family’s shelter in the Aamer al Sanad refugee settlement in Kab Elias, a town in Lebanon’s Bekaa Valley which has filled with Syrian refugees. Two of her ten children were killed in Syria’s civil war. Lebanon hosts some 1.5 million refugees from Syria, yet allows no large camps to be established. So refugees have moved into poor neighborhoods or established small informal settlements in border areas. International Orthodox Christian Charities, a member of the ACT Alliance, provides support for refugees in Kab Elias, including a community clinic.

Over half of the Syrian population of 22 million people have been forcibly displaced from their homes, with many of these people displaced more than once.

Daily more people are having to flee from the conflict. Now more than 6.6 million people are now displaced within the Syrian war zone and more than 5 million refugees are hosted by nearby countries, namely Turkey, Lebanon, Jordan, Eqypt and Iraq. UNHCR estimates that 13.1 million people need urgent humanitarian assistance inside Syria. Additionally there are 12.8 million who require health assistance, but 3 million are living in hard-to-reach or besieged areas and are exposed to serious health threats.

Due to the ongoing civil war, most agencies are unable to reach these people, and instead are assisting refugees outside Syria.

The IOCC is one of the very few relief agencies working inside Syria to help some of the millions of people suffering within their own war-torn country. This work is dangerous and difficult, yet they continue each day to provide relief.

The IOCC’s work includes the provision of emergency food and water, hygiene kits, education on disease prevention, hygiene and safe use of water, distribution of water filters, provision of bedding and other physical needs, helping people to cope with the emotional stress of the situation (psychosocial support), helping children to continue their education, and providing cash-for-work opportunities.  Families in Syria need this ongoing support as the crisis continues.

The situation in Syria is constantly changing, as are the numbers of people affected.

There is still a massive need for the provision of health, water, sanitation, food, education, and psycho-social support both within and outside of Syria for the Syrian refugees.

On 14 April, 2018, the United States and some of its allies launched air strikes against Syria. Here is a report by Australia’s ABC about the latest on this development.

For more detailed information on the situation in Syria, read this update from the global ACT Alliance.