Home Our work Emergencies Past emergencies

These are some of the past emergencies Anglican Overseas Aid has responded to with the generous support of donors in Australia.

On October 17 2016, the battle for Mosul began and humanitarian partners in Iraq have estimated that up to 1.5 million additional people were impacted.

The most immediate needs were for water, food, emergency shelter, and medical assistance. Our ACT Alliance partners, Christian Aid and Lutheran World Federation, were some of the few agencies working desperately to help those affected by this conflict.

One third of the total Iraqi population (approximately 34 million) had already been displaced prior to the battle for Mosul and were in need of humanitarian support. In Kurdistan, Northern Iraq, there were more than 1 million Internally Displaced Persons (IDPs) and refugees.

On 15 May 2016 Sri Lanka was hit by large storms that caused widespread flooding and landslides, with whole villages submerged. More than 237,000 people were made homeless and 84 people died. Overall, more than 340,000 people were affected.

We sent $10,000 from our Rapid Response Emergency Fund to support the emergency response work of the Board of Social Responsibility of the Diocese of Colombo (Anglican Church of Ceylon).

Their work included emergency relief programs for affected people, along with longer-term recovery and livelihood support once people were able to return to their homes.

Cyclone Winston hit Fiji on 20 and 21 February 2016 causing widespread devastation. The Category 5 storm was the strongest cyclone to ever make landfall in Fiji.

The Fiji Government estimates that up to 350,000 people have been affected. The response has been a mammoth task, complicated by the remote nature of the many islands that make up Fiji.

We responded quickly to support our ACT Alliance partners in Nepal as they helped people affected by the devastating earthquake that struck on 25 April 2015, which was followed soon after by another earthquake.

Money was sent from our Rapid Response Emergency Fund to our ACT Alliance partners, and since then generous donors have enabled us to send more. The relief and recovery work is ongoing.

Cyclone Pam rampaged across the 80 islands of the Pacific nation of Vanuatu on 13 March 2015. Out of a population of 267,000 people, 188,000 were affected, with 110,000 people in need of drinking water, and many left homeless or with damaged homes. Crop land was damaged or destroyed.

We joined with ACT Alliance members working in Vanuatu as part of a co-ordinated response. Members were given responsibility for different sections of the country; we were allocated the northern islands, where we have been supporting long-term development work with our partner, the Anglican Church of Melanesia (ACOM).

This was the first time Anglican Overseas Aid has been an implementing partner in an ACT Alliance emergency response. We submitted a proposal to ACT Alliance to work with ACOM in partnership with ABM (who have observer status with ACT Alliance) – a fantastic example of Anglican agencies working together.

In the remote islands of northern Vanuatu, water sources, water systems, food crops and agricultural land were damaged, and many people lost their stored food. People are subsistence farmers, and were already paying large prices for supplementary food to be shipped in. It is essential to rebuild their capacity to grow their own food. Our proposal was for $60,000 to help communities in these islands replant crops. ACT Alliance has fully funded this proposal, and the work on long-term agricultural recovery is ongoing.

We also raised more than $90,000 for our Cyclone Pam Response Appeal to add to the ACT Alliance project. This funding was used by ACOM for immediate emergency response after the cyclone, and is continuing to support ACOM’s response to affected communities.

As part of the longer-term recovery efforts, ACOM will work with communities to help them prepare for future disasters (including floods and cyclones), which is essential as a changing climate creates more volatile weather patterns in the Pacific. This work includes assessing their vulnerability and determining, as a community, how they can limit the damage from a natural disaster, minimise the risk to their community and respond quickly and effectively to future disasters.

In August 2014, the Primate of Australia, the Most Reverend Dr Philip Freier, Archbishop of Melbourne, launched our appeal to help Christians and other minority groups in Iraq affected by the brutal advance of Islamic State militants.

Our ACT Alliance partners Christian Aid and Lutheran World Federation are some of the few agencies who are working desperately to help those affected by this conflict.

Our partner in Gaza, the Al Ahli Hospital, (run by the Episcopal Diocese of Jerusalem) reported damage from the bombing, and staff worked tirelessly to attend to the wounded.

We raised more than $75,000, which was sent to the hospital to fund its work tending to the wounded, and providing material support to Gazans who took shelter in the hospital compound. The hospital continues to work to support Gazans as they recover from the impact of the conflict.

In the early morning of 8 November 2013, Typhoon Haiyan made landfall in the eastern Visayas region of the Philippines. With winds up to 250kmh sweeping through the region, accompanied by a storm surge of up to 5m, the typhoon caused widespread damage and losses. The Philippines Government says up to 14.1 million people were affected, including 6,300 casualties and hundreds more missing, 4 million displaced, and about 1 million houses destroyed or damaged across 600 municipalities and 44 provinces in nine regions of the country.

Anglican Overseas Aid launched an appeal, with $133,000 raised that supported the work of ACT Alliance partners Christian Aid and the National Council of Churches in the Philippines.

In the lead-up to the first anniversary of the disaster, our ACT Alliance partners in the Philippines produced this report about their response.

On 6 February 2013, an 8.0-magnitude undersea earthquake struck Solomon Islands and generated a destructive tsunami that hit a number of islands in an isolated chain in Temotu Province in the country’s south-east.

About 1,000 households across 25 communities in West Santa Cruz Island were affected, many of them losing everything, and there were 11 deaths, mostly children and the elderly.

Anglican Overseas Aid provided assistance in three areas to a value of $7,400, funded by donations from the Australian public. This included:

As part of the longer-term recovery, we have partnered with Solomon Islands International Red Cross to distribute solar lights to 500 affected families, along with providing support and training in the use and maintenance of the lights.

In 2010 and 2012, a series of failed rains plunged the Horn of Africa into drought, precipitating what became known as the East Africa Food Crisis.

With assistance from the Australian Government, which matched each dollar donated, 237 drought-destitute households had their goat herds restocked, and our partner, the Afar Pastoralist Development Association (APDA), educated families on how to care for these animals.

Valerie Browning, Programs Co-ordinator for APDA, says that it only takes 10 goats to bring a family up off its knees.

Many lives were saved as a result of this work.

Find out more in this video.

According to the country’s National Disaster Management Authority, the 2010 floods were the worst disaster in Pakistan’s history.

We responded through ACT Alliance partners.

On 12 January 2010 a powerful 7.0 magnitude earthquake struck the impoverished nation of Haiti.

More than 1.2 million people sought refuge in temporary settlements and 467,701 people left the severely damaged capital Port-au-Prince for other areas.

We responded by supporting ACT Alliance partners who had been working long-term in Haiti.

A series of devastating tsunamis struck Samoa, American Samoa and Tonga in 2009, killing scores of people, flattening villages and causing massive destruction. At least 150 people were killed by the deadly waves which struck the South Pacific countries on 29 September of that year.

Donations from Anglican Overseas Aid supporters helped those affected by the tsunamis in the South Pacific.

Hundreds of Palestinians – including many civilians – were killed and wounded during a massive air and ground offensive launched by Israel in late 2008 and early 2009. Israel said the invasion was designed to target Hamas, which controls the Gaza Strip, in the Occupied Palestinian Territories.

As a terrible cholera oubreak swept across Zimbabwe in early 2009, Anglican Overseas Aid warned that far worse was yet to come, with about 6 million people facing starvation. Maize production had collapsed and there had been almost total crop failure in some areas. Many people needed food handouts just to stay alive during the traditional hunger months from January to March.

Donations to the Zimbabwe Emergency Appeal went into an international campaign coordinated by the ACT Alliance to avert starvation, provide clean, safe water, and improve sanitation facilities in seven districts in Zimbabwe.

More than 2 million people were affected by Cyclone Nargis which struck Burma on 2 May 2008. The military junta imposed restrictions on access by international agencies, but local people, including churches and Non-Government Organisations, worked hard to bring relief to survivors in the worst affected areas. The ACT Alliance responded on behalf of member agencies, including Anglican Overseas Aid.

26 December 2014 marked 10 years since the Asian earthquake and tsunami swept over thousands of coastal communities, killing more than 220,000 people and leaving millions homeless.

Rapid Response Emergency Fund: From no hope to know hope 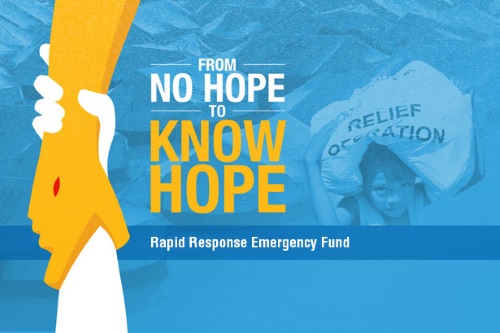 Donating to our Rapid Response Fund enables us to respond quickly when an emergency strikes around the world. Your donations will either be sent directly to our partners if we work in the affected area or we will join with the ACT Alliance using their networks to provide basic necessities such as food, safe drinking water, shelter, and good hygiene practice.