Home Our work Where we work Solomon Islands 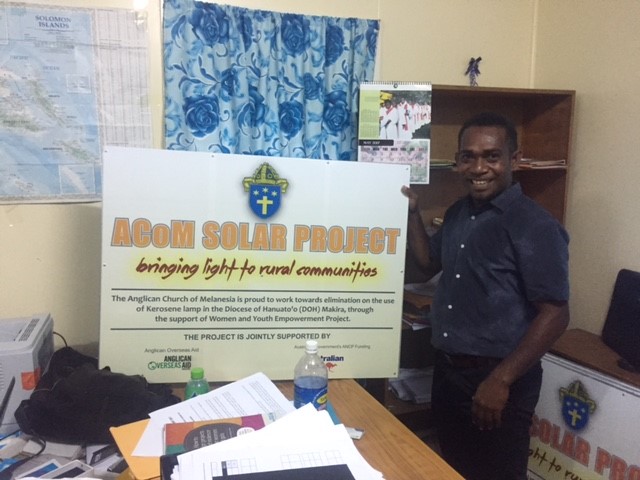 Our partner in Solomon Islands is the Anglican Church of Melanesia. We work through their Mothers’ Union, and the Anglican Sisters of the Melanesian Church.

The Pacific nation of Solomon Islands faces many challenges. Ranked 156 out of 188 nations on the UN’s Human Development Index, about 23 per cent of its 622,000 people live below the poverty line.

The Australian Government’s Department of Foreign Affairs and Trade says that the Solomon Islands is one of the most aid dependent countries in the world and lags behind other Pacific countries on most development indicators.

More than 80 percent of the population lives in rural areas scattered across multiple, remote islands, which makes communications, transport and delivery of basic health and education services extremely challenging for a government structure recovering from violent internal conflict from 1999-2003. Most of the population has limited access to health, education and water and sanitation services.

Opportunities for unskilled labourers to find ongoing and meaningful work, particularly in the outlying islands, are extremely limited, especially for women. Unemployment is high, and only 15 per cent of school leavers find paid jobs.

Many people are not connected to the electricity grid, and in many places people rely on kerosene lamps for light. They are dangerous and polluting, and place great strain on a family’s limited finances. Every year these lamps burn 2.5 million people and cause hundreds of thousands of related deaths. Inhaling their fumes is also akin to smoking two packs of cigarettes a day.

Gender inequality and violence against women and children is a serious issue – in the Pacific, 60 per cent of women and girls have experienced violence at the hand of an intimate partner or family member. The problem is exacerbated by high unemployment, drug and alcohol abuse and lack of institutional support.

What we're doing in Solomon Islands

We are working with the Mothers’ Union of the Anglican Church of Melanesia to increase access to solar lighting through the Bringing Light to Rural Communities project.

Decreasing reliance on kerosene that is both expensive and dangerous is an obvious benefit, but the project also helps create jobs and income. People are given business training and ‘loaned’ a small number of lights, which they then sell at a small profit. After they have repaid the original loan, they can purchase or borrow more lights and repeat the process.

Ongoing training in solar maintenance has allowed people to expand or establish businesses fixing a range of solar equipment, and because the lamps also charge mobile phones, owners can earn a small income providing a phone-charging service. Further income generation activities such as poultry projects have been established using the sales of solar lights. The lights are also used to support other work that was previously difficult at night, such as working in the fields, preparing produce for sale in markets, or fishing.

We also support the work of the Anglican Sisters of the Melanesian Church, who run the Christian Care Centre, the only women’s refuge in Solomon Islands. Their work includes supporting women who have been affected by violence, and raising awareness about the issue. We have worked with the Anglican Sisters since 1992.

If you would like to donate to our work in Solomon Islands, click on the ‘Donate Now’ button (choose ‘Solomon Islands – Solar Lights’ from the ‘Donation’ drop-down menu):

From soccer to solar in Solomon Islands

Common Grace have just posted an article on Holland Sikou, who works for our partner in Solomon Islands, the Anglican Church of Melanesia. Holland was an international soccer star before he turned his attention to solar energy. This is the final piece in ou...
Read more

The link is a man called Holland Sikou. In his early 20s, Holland played the world game for his country, but since 2011, he has been the Solar Co-ordinator for the Anglican Church of Melanesia (ACOM) in Solomon Islands. With our support, ACOM provides solar...
Read more