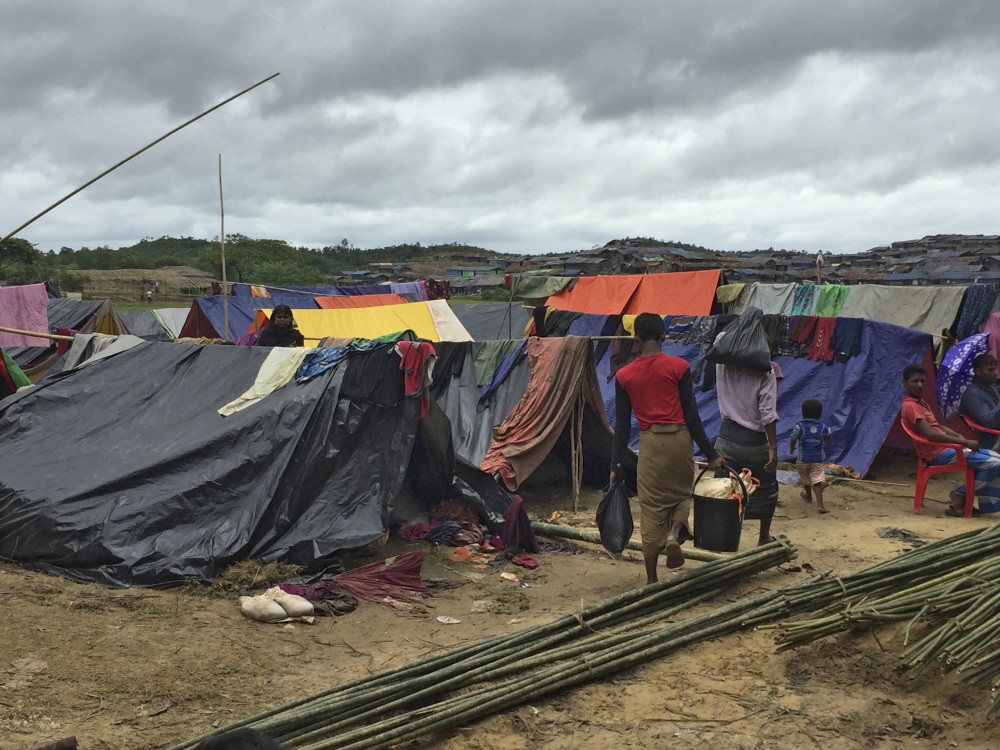 September 2017. Rohingya crisis. As the influx of Rohingya continues, makeshift shelters mushroom in areas outside the camps. Most are made with tarpaulin sheets and bamboo. Here, trees have been cut make way for new structures to be built. Photo: Christian Aid

“We are isolated in these IDP centers. We get some support but the shelters and toilets are inadequate, we don’t have enough food, or medicine, the children don’t have the school supplies they need and the youth and able bodied men and women sit idle with no livelihood opportunities.”

Anglican Overseas Aid is supporting the ACT Alliance’s Humanitarian Appeal for the Rakhine region in Myanmar.

Much of the focus on the crisis the Rohingya people are facing has been on the impact felt by Bangladesh, as refugees have fled across the border to safety. Our ACT Alliance partners have also been working in Bangladesh, whilst they have been preparing their response on the Myanmar side of the border.

ACT Alliance have recently launched their appeal for humanitarian work in Rakhine, north Myanmar. Our ACT Alliance partners, Christian Aid and Lutheran World Federation (LWF), are looking to raise over US$1.5m to help with the work in conflict-affected communities in Rakhine. It is estimated that more than 140,000 people are displaced and living in over 30 IDP (Internally Displaced Persons) camps in the Rakhine region.

Please support our Appeal for Rohingya in Myanmar.

The conflict in Rakhine started in 2012 and displaced approximately 140,000 people. During the 2015-16 period, approximately 25,000 IDPs were resettled near their original home by the government. On 9 October 2016 an armed attack on border guards in Northern Rakhine, and the retaliation by the Myanmar army, caused severe unrest and affected the lives of thousands of people, especially in Northern Rakhine. The violence intensified further on 25 August 2017. According to the Inter Sector Coordination Group (ISCG) of the United Nations, 500,000 people are reported to have crossed the border since 25 August 2017.

As this is a cross-border crisis which impacts Myanmar and Bangladesh, a coordinated humanitarian response among ACT Alliance members in the countries is necessary. Consequently Anglican Overseas Aid’s partners are responding to this crisis in Myanmar by providing:

More than 21,000 households and 15,000 individuals will be benefited by this intervention. Christian Aid and LWF will be working with local Myanmar church and faith-based agencies to support communities affected in Northern and Central Rakhine, including diverse ethnic and faith groups.

Alternatively, you can send a cheque/money order made payable to Anglican Overseas Aid to:

Your donation will be directed to the work of the ACT Myanmar Forum as they work with displaced people in Myanmar.

All donations of $2 or more are tax-deductible.